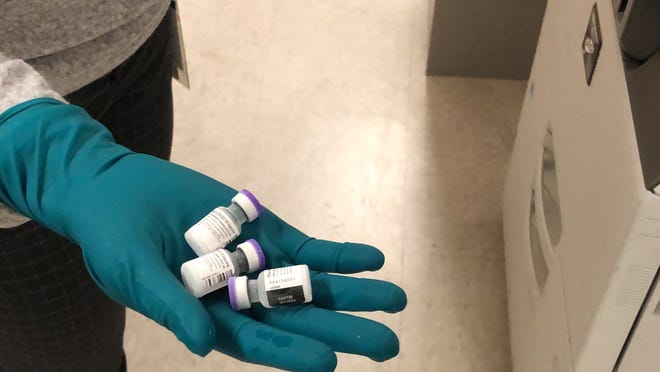 The moment has arrived for millions of Americans who said they were waiting for full and final FDA approval before getting the COVD-19 vaccine.

On Monday, the Food and Drug Administration (FDA) announced the Pfizer vaccine is the first COVID-19 vaccine to get full approval for those 16 and older. The vaccine continues to be used under emergency use authorization (EUA) for children aged 12 to 15 and as a third dose for certain individuals who are immunocompromised.

Monterey County and health officials acknowledged hesitancy among some groups but say this could start diminishing now that the vaccine has FDA approval.

Salinas resident Esteban Flores said getting vaccinated should come without a question, including the additional booster shots set to roll out in September.

“I was one of those people that thought for a while I should wait until it was fully FDA approved. I got it anyway because it’s just like getting the flu shot but for the COVID,” Flores said. “Same thing for a booster shot, you have to come back every year for a flu shot anyway.”

The news comes as a victory for many political and health institutions that pushed for widespread vaccination.

Natividad Hospital Interim CEO Dr. Chad Harris said although there are a variety of reasons why many have refused to get the vaccine, FDA approval could give individuals the confidence they were waiting for.

“We are planning for a strong turnout of people at our Wednesday vaccination clinics over the coming weeks,” Harris said.

More than half a million vaccines have been administered in Monterey County and more than 53,000 of those were distributed by Natividad. Monterey County was also among the first large employers in the county to mandate vaccinations for their 5,400 employees.

Board Supervisor Luis Alejo said FDA approval means not only would there be less push back from hesitant groups, but more mandates could be on the horizon.

“Today’s approval leaves less of a reason to not see more mandates by employers throughout our state,” he said.

The FDA confirmed late last year through a more streamlined evaluation process that the vaccine, from pharmaceutical giant Pfizer and its partner, German startup BioNTech, was safe, effective and could be reliably produced.

During a press conference on Monday, President Joe Biden called it a key milestone in the fight against the COVID-19 pandemic. He urged those who were waiting for FDA approval to get their vaccines sooner rather than later amid the rise in Delta variant cases.

According to the Centers for Disease Control and Prevention website, more than 200 million people in the US have been fully vaccinated and more than 170 million have received an initial vaccine dose.

The Moderna and Johnson & Johnson vaccines have yet to receive FDA approval, but health officials say it’s only a matter of time.

USA Today contributed to this report.

Our Kids Are Not Broken: Tools to Build Resilience in Youth Workshop Series