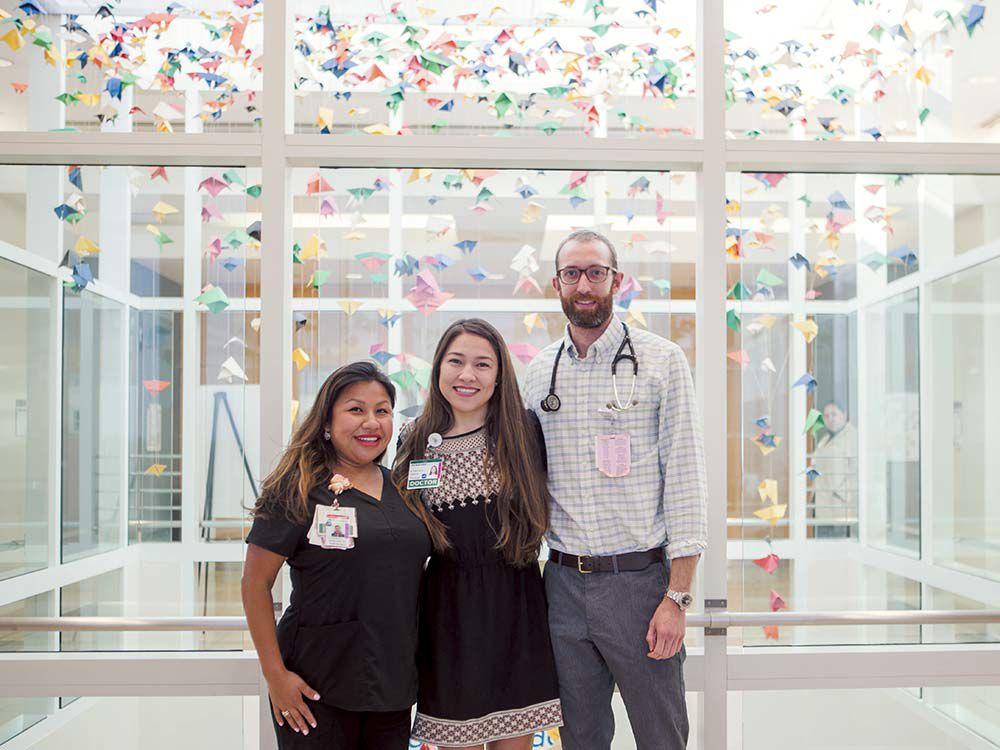 Veronica Aragon, Reiko Sakai and Ian McDaniels (left to right) are all HEAL fellows working together to shrink inequities in health care.

Veronica Aragon knows about the systemic inequality that’s inherent in U.S. society because she’s experienced it firsthand. She was born in a small village in Oaxaca, Mexico. When she was 2, her family moved to Pacific Grove and her parents went to work in the agriculture fields. As Aragon grew, the family experienced poverty and the lack of access to safe housing and health care. Today, Aragon is a registered nurse at Natividad hospital in Salinas, working with patients who struggle with the same circumstances her family did.

Aragon internalized those experiences into a desire to change the local health care system. That desire has now turned into action with the help of a fellowship from UC San Francisco’s HEAL Initiative, of which Natividad is a partner. The acronym stands for Health, Equity, Action & Leadership. HEAL “trains and transforms frontline health professionals through building a community dedicated to serving the under-served as their lifelong choice,” according to its mission statement. Its vision is to bring people together to transform systems, who will in turn be transformed by the process.

“The HEAL program and its framework really do solidify what I’ve known,” says Aragon. “It gave me actual names for what I’ve felt all along, what I’ve seen growing up and what I’ve seen in my work.”

What she’s seen includes issues many are uncomfortable talking about: racism and systemic racism; inequality; violence against women; power and privilege preventing people from getting the services they need. Aragon says during her HEAL training in Santa Cruz County and Oakland, fellows spoke openly about those issues and together strategized how to overcome challenges. Her goal is to close gaps between physical and mental health services in Salinas that keep patients from getting the care and attention they need.

Aragon’s not doing it alone. Two of her HEAL co-fellows are doctors Reiko Sakai and Ian McDaniels, a husband-and-wife team who came to Salinas from their residencies in Salt Lake City, Utah, Sakai practicing in pediatrics and McDaniels practicing family medicine. While Aragon is a site fellow – someone who already works for a HEAL partner like Natividad – Sakai and McDaniels are rotating fellows, health professionals chosen to enter underserved communities in the U.S. and abroad for two years. The couple is spending their first year at Natividad and will switch to a clinic in Chiapas, Mexico, in July.

The two grew up in Vermont and earned medical degrees from the University of Vermont. Both developed an interest in global medicine and treating underserved patients. While in Utah, Sakai worked in a clinic serving a primarily Latino population, receiving a community health grant to address immigration-related toxic stress among Latino youth. McDaniels implemented a project in Vermont training Bhutanese refugees to be patient navigators.

Although they each have experience abroad – McDaniels spent several months in Uganda while he was a medical student and Sakai lived in Ecuador for one year as an exchange student after high school – McDaniels says coming from Vermont and Utah he recognizes they’ve never lived in a community with a large underserved population like Salinas. They are grateful for the partnership with Aragon, whom they call their mentor, cultural liaison and friend. “It’s through Veronica we feel closer to the community,” McDaniels says.

Aragon says she and the two doctors are partnering to find solutions to the issues they see their patients facing on a daily basis, starting with asking each other questions: “What can we do in the community? How can we play a role in this current system? We’ve talked about bridging the gaps between Natividad and county clinics and the Health Department.”

It’s relationships like what the three Natividad staff members have developed with each other, as well as with their HEAL fellows from elsewhere, that are one of the most important assets that come out of a fellowship program like HEAL, says Sakai. Another important asset is the cross-education that happens between fellows and the communities where they are placed.

“My personal approach has been to be very humble and open,” says Sakai, adding that she seeks to “listen, watch and learn and reserve my judgements and impressions.”

Sakai and McDaniels had barely heard of Salinas before they arrived a few years ago – “It rang a bell in terms of Steinbeck,” Sakai says – but are so taken with the community after only a few months they’re already talking about returning after their stint in Mexico.

“We may come back and work here permanently,” McDaniels says. “We’re talking seriously about it.”

Editor’s Note: Veronica Aragon was incorrectly identified as Veronica Juana in the print edition based on information provided by Natividad.