It turns out the under-resourced people who need medical help in Africa, Asia, the Caribbean and Salinas Valley have much in common. If anyone would understand that, it’s Natividad hospital’s chief of staff, Chris Carpenter, who began the two-year post on July 1 after he was elected by his peers. Carpenter grew up in San Leandro, and didn’t travel much growing up but eventually traveled overseas in college. He combined his passion for medicine with an interest in experiencing other cultures and eventually practiced in some challenging areas of the world, including the Democratic Republic of the Congo.

“We have the resources at Natividad to provide top-notch care but the patients we’re taking care of are often very impoverished,” Carpenter says. The conversations he has with families that face a lack of resources is not unlike those he’s had with patients in Congo or in Haiti: “Our patients struggle in a similar way to how patients might struggle in very impoverished countries.”

Carpenter and his wife, Lisa Dickey, have worked to improve patient care in Nepal, India, East Timor, Liberia and Haiti. After marrying, they chose Haiti as “closer to home.” It was there they joined others in founding the Kay Mackenson Clinic, which treats children with chronic diseases and is completely staffed by Haitian doctors, nurses and support staff.

Haiti is also where they adopted their twins, Gabriela and Tristan, whom they met as 5-month-old malnourished patients. Their mother was a homeless widow raising six children at the time. “She had come to the conclusion that she wanted to do her best for her kids and wanted to put them up for adoption,” Carpenter says. The twins are now 9, and the family is still in touch with their biological mother.

Carpenter shares with some of his patients a family background in farming – three grandparents came from agriculture. Carpenter’s parents were working-class, his dad in construction and his mom as a secretary. It was his mom who was determined to see that her children become the first generation in the family to go to college. Carpenter got a job driving a forklift out of high school – he says he didn’t know the logistics of how to apply for college – until his mom signed him up for classes at Chabot College in Hayward. A physiology class there sparked his interest in medicine.

Carpenter sat down for a Zoom interview to share more about his life and what he hopes to accomplish as a leader at Natividad.

Weekly: How dangerous was it practicing medicine in the Congo, and what made you and your wife want to go there?

Carpenter: I had an opportunity to do quality improvement projects in the neonatal intensive care unit and to start working toward building a pediatric ICU. It was extremely challenging and there is tremendous violence and insecurity, but we were not affected like the locals were. We were very sheltered. Patients who were living in the mountains or low-level forests were constantly afraid of the paramilitary and all of the rebels in the area. We never felt threatened ourselves but we saw people impacted by violence almost on a daily basis.

You later went back and made an independent film, Born in Goma.

On our ride out of Congo we thought we would never come back because it was so difficult and challenging and stressful. When we finished our work in East Timor both of us said, independently, we want to go back to Congo because we had made the greatest impact there. We worked day in and day out with the local physicians there and the documentary was an interesting project, but it wasn’t our main purpose. We wanted to film our patients’ experiences and their lives.

How did people react to the film?

Whenever I showed the film people would ask me, “What can I do, how can I get involved?” My goal was not necessarily to directly advocate for Congo, but for people getting more involved [with the underserved people] in their community.

After practicing all over the world, how do you find working at Natividad?

I absolutely love it. I live right next to one of the best hospitals in the country, Children’s Oakland, and they are fantastic. I love the people there but I enjoy Natividad so much I drive 92 miles each way from my house to go to work. When I initially came [in 2013] I was asked to help build the pediatrics program. I made an initial commitment for six months to two years and when it was time for me to talk about transitioning, I didn’t want to leave. I like the hospital, I like the people I work with, the communities. If I had to nail it down to one thing that keeps me there, it’s the patients. It’s a fun patient population to work with and very satisfying.

What are the biggest health challenges for families in the Salinas Valley during the Covid-19 pandemic?

Access to health care and access to preventative medicine – getting in to see your pediatrician or family practitioner just for screening care and immunizations and making sure that we can keep that up.

Another issue is making sure kids have access to education and equitable education, because our families that are resource-strained don’t necessarily have the capabilities to have online education and in-home tutorials and parents that can sit with their kids. And then services for kids that need it. Children who get extra services in school, whether nutritional or developmental, how do we maintain that extra level of service while kids are staying at home?

What’s your goal as Natividad’s chief of staff?

I’m really trying to enhance diversity in leadership. We have great leaders at the hospital but I think our leadership should reflect our patient population.

My transition to leadership was not a smooth linear path. Leadership is not something that comes to me naturally, I’ve had to do quite a bit of training and working with mentors. It’s something I’ve worked hard to continually improve. The reason I say that is many people struggle to move into leadership because they’re afraid they don’t have the natural gifts. It doesn’t take having the actual gifts, it takes the desire to get better, to learn and to improve.

Physicians are not taught to be good leaders or lead teams effectively. I think if people knew that you don’t have to be a fantastic leader to start learning about being a leader and improving your skills, maybe that will encourage them to jump in and throw their hat in the ring. 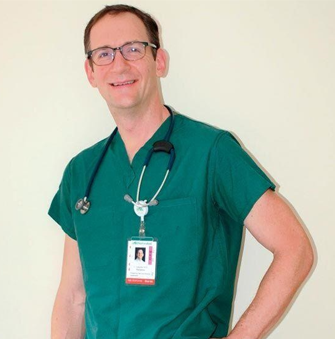 “I was interested in almost everything,” Carpenter says of choosing a focus in medical school. “Ultimately I liked being around kids.” He enjoys the challenge of treating babies who can’t speak – “It’s like being a detective” – and helping families.