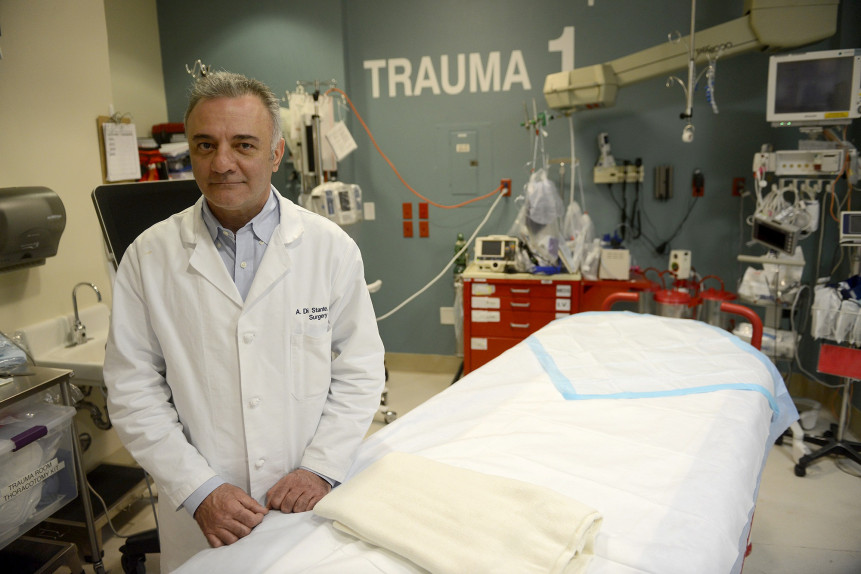 Dr. Alex DiStante inside a trauma room at Natividad in Salinas in March. Dr. DiStante was a key figure in bringing the Trauma Center to Natividad.

SALINAS — After four years of operation, Natividad’s Level II Trauma Center has earned a critical thumbs up, and done it with flying colors.

Officials at the county-owned hospital announced Monday the Trauma Center has earned a three-year verification from the American College of Surgeons, recognizing the hospital for the meeting the “highest standard of care possible for treating injured patients.” In addition, the highly prized verification was awarded without any deficiencies, which Natividad Trauma Medical Director Dr. Alex DiStante said is a noteworthy accomplishment in the industry.

The verification process took a full year of gathering data, statistics and evidence under nearly 300 criteria requirements, including a two-day visit in November from the American College of Surgeons verification review committee to review the trauma center’s patient care from arrival in the Emergency Department to hospital stay, discharge and rehabilitation.

DiStante, a 22-year veteran of trauma care, called the review a “major, major, major undertaking” for the Trauma Center, which has been operating since January 2015 and is entering its fifth year of operation.

“It’s eye-opening how much work goes into this,” he said. “Obtaining the ACS’s verification of our Level II trauma center is a significant accomplishment. It recognizes Natividad’s commitment to providing the highest level of trauma care on the Central Coast. Verification is a comprehensive process which recognizes patient care as well as community outreach programs designed to prevent traumatic injuries.”

Natividad Trauma Program Manager Julie Ramirez said the verification shows how successful the hospital has been in establishing and developing the program, which worked for years to earn the county Emergency Medical Services agency designation over Salinas Valley Memorial Hospital.

“The verification shows that we have state-of-the-art services and a proven record of top-level patient care,” Ramirez said. “This achievement was made possible by the immense support from hospital administration, the board of trustees, and our dedicated trauma teams.”

DiStante noted that Natividad’s Trauma Center features one of the highest acuity injury rates in the state’s Region II, which stretches from Marin to Monterey counties, making it even more critical to offer quicker access to trauma care rather than relying on helicopter flights to a Bay Area trauma center. He said trauma centers are proved to be capable of lowering mortality rates by 20-25 percent.

“In life-threatening situations, minutes matter,” Natvidad CEO Dr. Gary Gray said. “Accidents can happen to anyone, any time. Our trauma care services are here to provide the best care for every resident and visitor to Monterey County and beyond. Our trauma team is the best of the best. I’d trust them with my life.”

A final report on the verification review is still pending, DiStante said.

In a California Valley, Healthy Food Everywhere but on the Table